Your Brand Voice Should be Comfortable 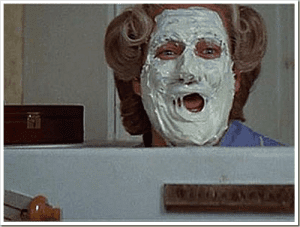 Full disclosure: I’m watching Mrs. Doubtfire on TV right now. But let’s remember: inspiration comes in all shapes and sizes. But your brand voice? It should be inspired by something that makes you comfortable.

Mrs. Doubtfire is a great metaphor for adapting a brand voice to appeal to a target market. For the roughly 5% of you who aren’t familiar with the movie, the premise is that a disorganized, recently divorced man imitates an elderly English nanny to win a job taking care of his children. When he’s by himself, he retains his normal persona, but around his ex-wife and children and any time he is wearing the outfit, he is Mrs. Euphegenia Doubtfire. He does a fantastic job, but is ultimately caught up when he has to rush in-between the two at a dinner meeting. Very lovable movie.

What does this have to do with brand voice? I have a theory. The reason Daniel can be Mrs. Doubtfire in an instant has little to do with his ability to improvise – but everything to do with his comfort level with Mrs. Doubtfire. Her innate qualities are him – if he were everything his target market (ex-wife and children) wanted him to be. She also carries similar personality traits: she’s caring, loving and quick-witted.

If Mrs. Doubtfire is so much like Daniel, why doesn’t anyone notice until his physical traits are revealed when he’s supposed to be her? Because he’s created a character instead of an exact replica. Your brand voice can and should be comfortable to you, which will enable you to use it effortlessly, but it shouldn’t be exactly who you are. You’ve got to think about who your target market wants you to be.

Have you created your brand voice yet? Does it reflect pieces of you?

advice, branding, websites
Previous Post
A Face We All Can Love
Next Post
Brands We Love: ISU College of Engineering