Your Brand Voice in a Crisis

No matter what sort of brand voice you have – whether it be witty, charming, snarky or sweet – there are two qualities that should emanate from all brand voices, at all times: honesty and sincerity.

Customers and followers don’t expect perfection; we’re all human, so mistakes are inevitable. But the way a company reacts to those mistakes says a lot about the brand’s character and trustworthiness.

Last month, GoDaddy.com had a whole lot of explaining to do when a service outage forced many of the websites it hosts to go offline. They wasted no time reaching out to clients through email, Twitter, Facebook and other social media avenues to apologize and provide updates (in both English and Spanish!). Go Daddy was honest regrading their mistakes, even when the online community was blaming a hacker for the problems.

Initial online grumblings died down, and the mishap was largely forgiven. Even in the midst of chaos, loyal customers were defending Go Daddy with comments like, “lets hope Godaddy stays alive. They’re a great American company,” and “Of course I am [going to continue using them]. They’ve been my registrar with no trouble for like 8 years.”

After the fact, Go Daddy’s CEO was proactive in providing credit to its customers. Gestures like that produce comments like this: 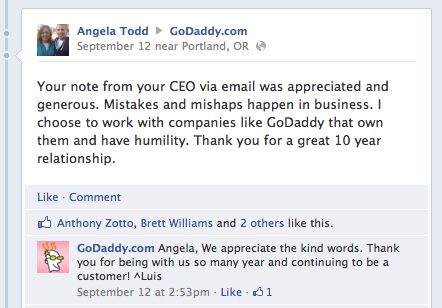 If a brand has a sincere and honest brand voice (and not just in times of crisis), the public is largely forgiving.

For those of us living in Iowa, you may have seen Arby’s recent Slicing Up Freshness campaign dramatizing the distance between Subway’s turkey slicing facilities in Mt. Pleasant – with “Iowa” named specifically in the ad – and any given Subway restaurant.

If you missed it, you won’t be seeing Iowa referenced in their advertising any longer. Arby’s quickly responded to the Iowan outrage. Within 48 hours, Arby’s had pulled the commercials and used its Facebook and Twitter sites to issue a sincere letter of apology to the good people of Iowa.

What struck a cord with this Iowan was not only the chief marketing officer taking full-responsibility for the advertising mishap, but also his sincere understanding and empathy regarding hometown bashing (he’s from Cleveland. Need I say more?). That tiny little tidbit made the Arby’s brand voice a bit more real, and that much easier to forgive.

If you get into one of these pickles, and need to get into specifics of “honest and sincere” communication, call us! We’re happy to help in a public relations emergency.